Confused? So are we.

The production overlap is due to the Silverado 1500 being built in two plants, one in Fort Wayne, Michigan and the other in Silao, Mexico. One plant has continued to produce the current truck while the other underwent revisions to produce the updated truck, which is now in production and about to arrive at dealers, Chevy spokesperson Megan Soule told TCC. Soule wouldn’t comment which of the two plants is now producing the new truck.

This situation will only be for the 2022 model year with all 2023 models being the refreshed model, according to Balch.

The Silverado 1500 LTD should begin selling out by late April, with Chevy expecting inventory to be depleted by the summer, according to Cars Direct. 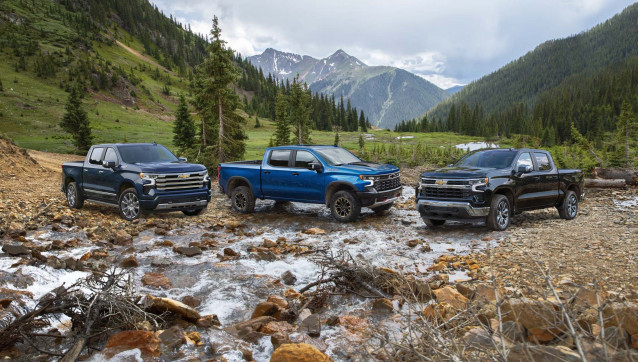 The updated 2022 Silverado 1500 costs $2,100 more than the current thanks to standard active safety technology such automatic emergency braking, larger 13.4-inch touchscreen (and 12.3-inch digital gauge cluster), and seemingly nicer interior with console-mounted T-shifter along with a handful of exterior design tweaks.

Soule said that while both trucks are arriving at dealerships at the same time, the “changeover is going to be fairly limited.” Some trucks are being sold before ever arriving at the dealership and dealers are having a hard time keeping trucks on the lot.

Dealers are receiving the standard training for a model changeover that explains the differences between the current truck and updated truck, but it’s on the dealer to explain these differences to the customer, Soule said. There is no specific paperwork or documentation that outlines the differences for a customer.

But the ripple effect of this goes beyond buying a new 2022 Silverado 1500 on the lot. Buying a used 2022 Silverado 1500 will be confusing for buyers for years to come. It would be easier if the LTD trucks had a badge designating them as such, but no such luck. Buyers will just have to know what they are looking for or at.