The redesigned 2021 Nissan Rogue compact crossover SUV unveiled in June gets a wealth of upscale improvements, including Nissan’s top Platinum trim for the first time, but the powertrain is limited to one engine despite competitors rolling out hybrids, plug-in, and electric variants.

Powering the 2021 Rogue is an uprated 2.5-liter inline-4 that makes 181 horsepower and 181 pound-feet of torque, improvements of 11 hp and 6 lb-ft over the 2020 model. The continuously variable automatic transmission (CVT) has been tweaked and powers the front wheels or, optionally, all four wheels.

Using a new “common module family” platform that will be applied to future larger vehicles (such as the forthcoming Nissan Pathfinder) Nissan says the Rogue has shed 100 pounds and that, along with the revised CVT and aerodynamic body elements, as well as lighter-weight aluminum doors, fenders, and hood, should make it 1 to 2 mpg more efficient over the 2020 Rogue, which gets an EPA-rated 26 mpg city, 33 highway, 29 combined in front-wheel drive. Fuel economy and price will be released when the Rogue goes on sale in fall 2020. 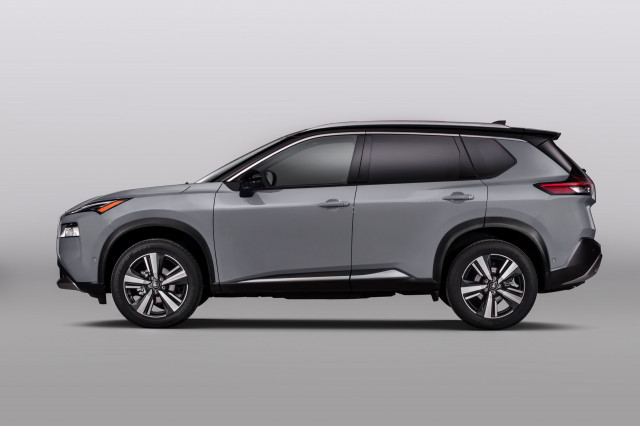 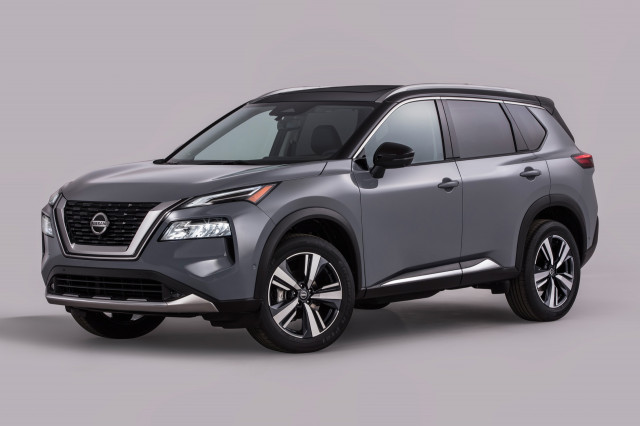 The most noticeable changes to the overhauled Rogue appear up front and inside the fancier cabin. Inspired by the Nissan Xmotion concept car, the nose of the 2021 Rogue flattens as it meets the broader, taller grille. It looks stronger, more truck-like, without being all grille and no chill like some other automakers.

The headlights are different. Automatic high beams sit atop LED low beams; split off and set above that are the daytime running lights. Those DRLs and turn indicators reproach the road like Aunt May’s eyebrows. Aerodynamic elements such as active grille shutters, underbody covers, and a rear spoiler are more effective than the eyebrows in pushing wind down, out, and around the crossover.

Along the body, a U-shaped line running from the side mirror to the door handles and up into the blacked out rear roof pillar emphasize familiar Nissan design cues. Fifteen color choices, as well as five two-tone colors are offered; a boulder gray with a black roof strikes a sharp pose. The door handles hold the bigger surprise; each handle has a button for proximity remote access, so the driver doesn’t need to hit the fob twice or push the unlock button inside.

That’s one of many subtle refinements made to the Rogue. The old mechanical gear shifter has been replaced by an electric shifter to open up space in the center console, which is now divided into two levels. The lower level stows items you want out of sight but not out of reach. A storage area below the butterfly elbow rest opens up longwise, so all five passengers have equal access to it. 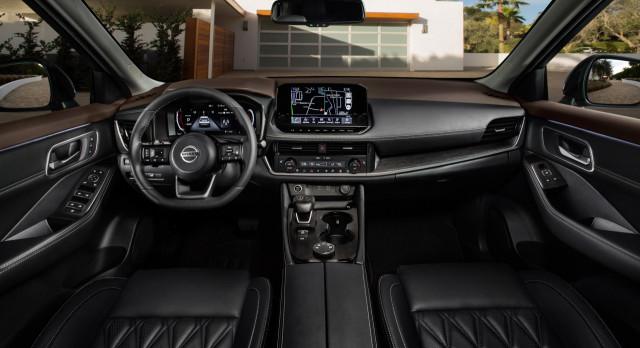 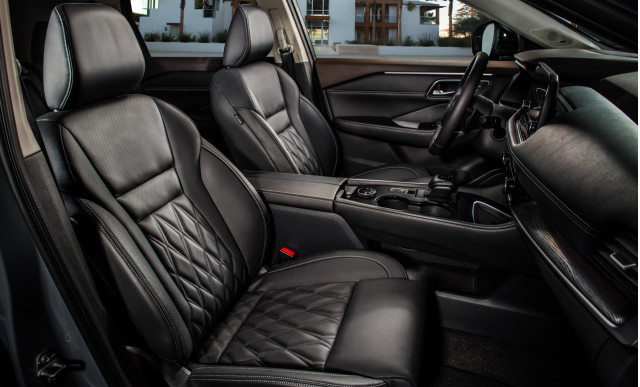 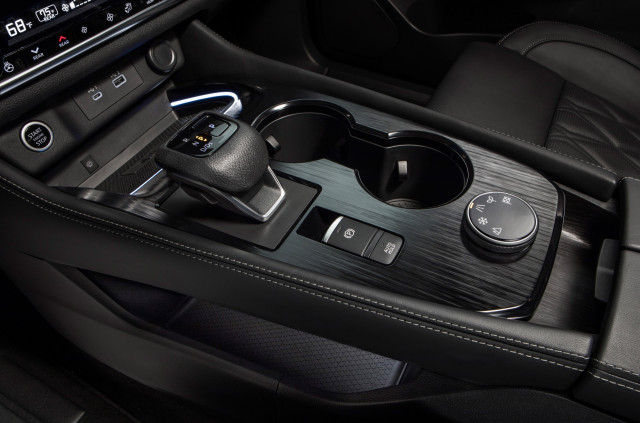 Even though the Rogue has gotten 1.5 inches shorter and a bit lower, cargo volume with the rear seats down increases from 70 cubic feet in the outgoing model to 74.1 cubes. The rear doors open 90 degrees for easier entrance and exit, as well as an easier time getting child safety seats in and out. There is plenty of leg room in the rear seats, as well, to fit four adults comfortably, or five college students on a budget road trip home.

Technology is at the forefront of the 2021 Rogue, with standard features such as keyless entry on all four doors, keyless start, Apple CarPlay and Android Auto compatibility, up to four USB ports, an 8.0-touchscreen for infotainment and a 7.0-inch instrument cluster display that can be upgraded to a 12.3-inch digital display. Options abound on the four trim levels (S, SV, SL, and Platinum), such as a 9.0-inch touchscreen, a 10.8-inch head-up display, wireless Apple CarPlay, and a smoother, more predictive ProPilot Assist driver-assistance system. It uses GPS and updatable map data to forecast slowdowns when approaching a curve in the road, a junction, or near exits. In stop-and-go traffic, the adaptive cruise control can stop for up to 30 seconds and restart without driver intervention. 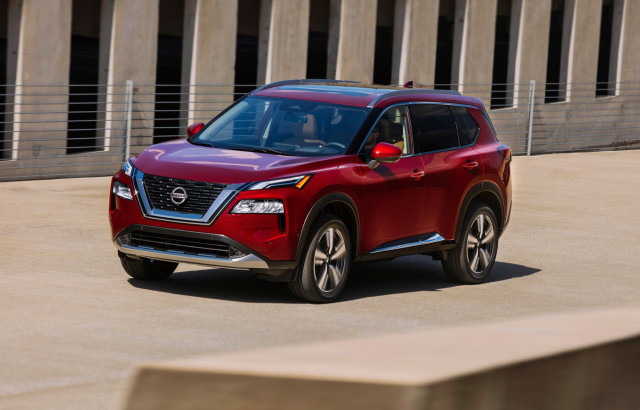 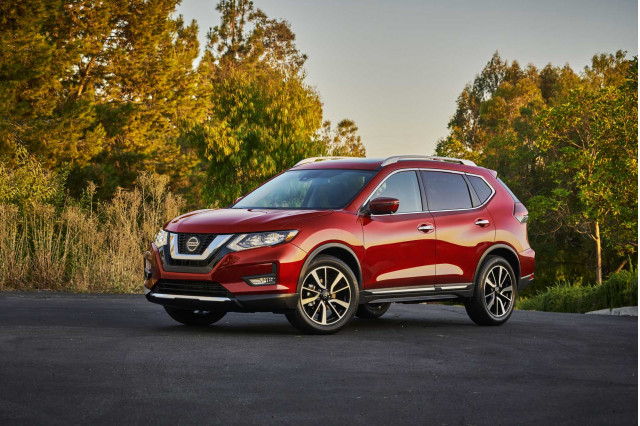 Like the redesigned Sentra and Altima, Nissan nudges more upstream with the available features on the 2021 Rogue. At the same time, Nissan seems content on tweaking the CVT and existing engines rather than introducing the sportier 248-hp VC-Turbo engine offered in the Altima, or a more efficient hybrid offering to keep pace with the Honda CR-V, Toyota RAV4, or Ford Escape. Maybe Nissan will go Rogue later by offering more powertrain choices for its best-seller.