The Mazda 3 and Honda Civic stand above and beyond much of the compact-car class for how they prioritize the driving experience itself. Neither one forgets that cost-conscious compact-car shoppers want a car that’s inherently practical, frugal, and packed with features for the money.

These two rivals at the fun-to-drive end of the small-car spectrum have a lot in common. They’re both offered in hatchback or sedan versions, with the hatchback versions pushing boldly in the styling department. They offer manual gearboxes in at least some of their lineup at a time when that’s become hard to find. And they’re both high achievers for safety.

The 2020 Honda Civic and 2020 Mazda 3 figure earn the exact same TCC Rating of 6.7 out of 10. While these two models align quite closely in feature content, they distinguish themselves by their performance, styling, and infotainment systems.

With respect to styling, both of them strike a handsome profile in sedan form yet hit a quirkier, more offbeat note in hatchback form. The Civic hatchback’s combination of creased sheetmetal and sharply delineated lower-body aero pieces are flamboyant in a brash way. The Mazda 3 is softly sculpted in hatchback form, with an unexpectedly thick rear pillar design that makes it look awkwardly weighted to the back. The hatchback’s complete lack of creasing means it can also look quite different depending on the lighting and the background. 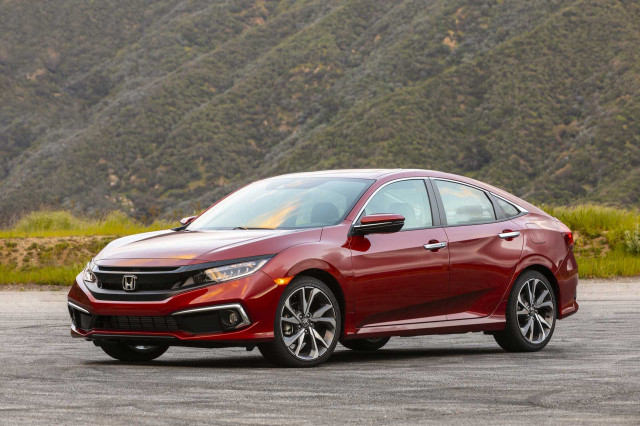 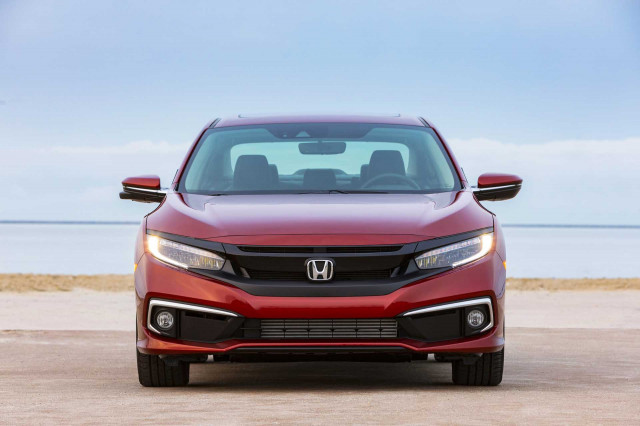 From a performance standpoint, both the Mazda 3 and the Civic are detail-oriented in a way the driver will appreciate; but it’s the Mazda 3 that comes across as the most detail-obsessed. Spend a few hours driving each of these on curvy canyon roads and highways, and you might start noticing details in the Mazda 3 that aren’t typical in small cars, like a linear accelerator, a precise steering feel that quickly feels second nature, and ride and handling that’s firm but won’t toss you around over choppy city surfaces. The Civic offers some of the same impressions, but its driving position feels a little less natural and responses to inputs aren’t quite as harmonious.

While the Civic’s powertrain responsiveness is a step better than in most compact cars, its sometimes-lagging CVT just doesn’t compare to the quick, decisive behavior from the 6-speed automatic in the Mazda 3. The non-turbo 2.5-liter inline-4 in the Mazda, making 186 horsepower and 186 pound-feet of torque, is a step ahead of the popular 1.5-liter turbo-4 in the Civic, which makes 174 hp and 162 lb-ft of torque—even though the Civic makes its peak torque down low for easygoing stop-and-do driving.

There’s no super-efficiency version of the Mazda 3, but those who like the fundamental package of the Civic sedan will find the closely related 2020 Honda Insight to their liking. That hybrid gets an EPA-rated 55 mpg city, 49 highway, 52 combined.

The Mazda 3 now offers one key advantage that many shoppers might consider a must-have: available all-wheel drive. It’s offered as a $1,400 option on all but the base 2020 Mazda 3 sedan, while AWD isn’t offered at all on the current Civic lineup.

Inside, these two compact cars are both great at taking care of occupants, but with different priorities. The Civic has a low dash and a great view outward, and most of its trims and materials are far removed from the cheap, plasticky interiors of the not-too-distant past. The Mazda 3 feels more like a sports car from the moment you sit in the driver’s seat—it’s a little lower, with more of a cockpit layout that envelops you, somewhat at the expense of airiness. The Mazda 3 is nothing special for back-seat space but impressive in its materials throughout the cabin. The Honda feels the roomiest, but the Mazda gets a bonus nudge for ride quality, refinement, and form-fitting front seats. 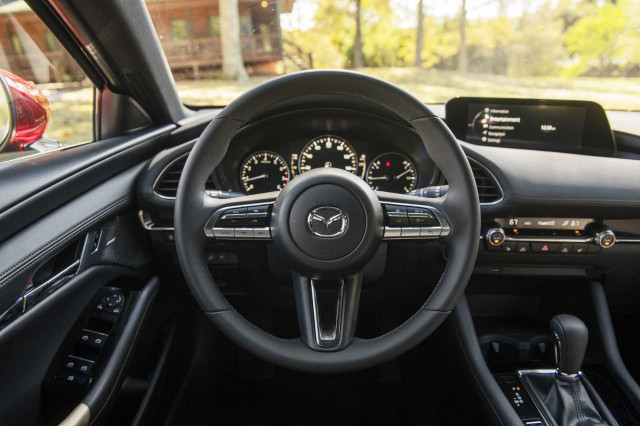 Both the Honda Civic and the Mazda 3 offer standard automatic emergency braking, adaptive cruise control, and active lane control. The Mazda also offers a blind-spot monitoring system and available head-up display system. If anything, the Mazda is a tick ahead for those added features and its better-rated standard headlights.

The Car Connection’s editorial staff is split along infotainment party lines on whether the Mazda 3’s banishment of touchscreens is a good thing. From the time you get into these cars, it’s a key difference. In the Mazda you’ll need to acclimate to the rotary controller on the center console and a suite of steering-wheel and voice commands. Once familiar, those might help you keep your eyes on the road. Or you could primarily use the touchscreen system in the Civic. Both systems are Apple CarPlay and Android Auto compatible, but the Honda system definitely provides something closer to what you get on your smartphone—for good or for bad. 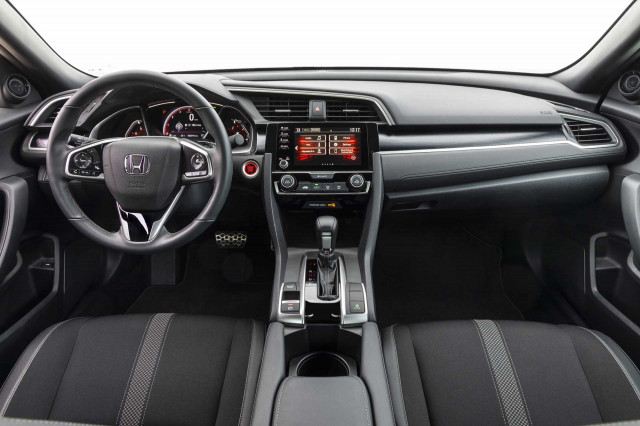 The Honda Civic lineup starts at $20,680, ranging past $28,000 for top Touring models. It comes in LX, Sport, EX, and Touring trims, plus Sport Touring models for the hatchback—as well as Si versions of the sedan or coupe and a top-performance Type R hatchback. The Mazda 3 lineup starts at $22,400 and ranges past the $30,000 mark. Base, Select, Preferred, and Premium versions are offered for the Mazda 3 sedan, while the Mazda 3 hatchback omits the Select model. AWD isn’t offered in the Base model.

Our preferred build for the Civic is in EX form, at around $25,000 and including extras like dual-zone climate control, 17-inch wheels, and Apple CarPlay and Android Auto compatibility. For the Mazda 3, we’d probably go for the base model, which in its more elegant sedan form gets you surprisingly much for less than $23,000—including good sport seats, a great suite of safety and comfort features, and most of the infotainment features of upper trims.

For those who put the priority on efficiency and a spacious interior, the Honda’s probably the way to go. But for those who put a lot on value for money and yet appreciate the fine details of the driving experience—or want all-wheel drive in a car that’s not riding high—the Mazda 3 has greater appeal.